“The lion has roared— so who isn’t frightened? The Sovereign LORD has spoken— so who can refuse to proclaim his message?” Amos 3:8 NLT

As cataclysmic natural disasters, as well as political and economic upheaval continues to erupt throughout the world the Body of Christ must listen to God’s prophetic voice and come into alignment with His purposes and timing. Hebrews 12:26-29 says, “And His voice shook the earth then, but now He has promised, saying, “Yet once more I will shake not only the earth, but also the heaven.” This expression, “Yet once more,” denotes the removing of those things which can be shaken, as of created things, so that those things which cannot be shaken may remain. Therefore, since we receive a kingdom which cannot be shaken, let’s show gratitude, by which we may offer to God an acceptable service with reverence and awe; for our God is a consuming fire.” The shaking has intensified as we draw near to the return of Christ.

In this post, I’d like to share some of my thoughts on the Hebraic year 5782. Rosh Hashanah begins Monday, September 6 and ends In the evening Wednesday, September 8.  At the beginning of Rosh Hashanah, the Jewish New Year, “head of the year” or “first of the year,”  the festival begins on the first day of Tishrei, the seventh month of the Hebrew calendar, which falls during September or October.

Rosh Hashanah commemorates the creation of the world and marks the beginning of the Days of Awe, a 10-day period of introspection and repentance that culminates in the Yom Kippur holiday, also known as the Day of Atonement. Rosh Hashanah and Yom Kippur are the two “High Holy Days” in the Jewish religion.

Chuck Pierce, Time to Advance: Understanding the Significance of the Hebrew Tribes and Months

As I ponder Hebrew year 5782, I have a strong stirring in my spirit that the world is about to witness God’s glory in this generation in a way we have not seen before. So let’s begin with the Hebrew alphabet 5 and 7 Hey and Zayin.

The first letter of the Hebrew alphabet is called “Aleph” symbolizing oneness and unity. Aleph is “father” or master and Lord. The original pictograph represents an ox, strength, and leader. The design of an Aleph is actually made up of three different letters: the letter Yud or dot above; a Yud or dot below (one to the upper right meaning arm and the other to the lower left representing the revelation of YHVH to mankind; and a diagonal Vav, or line suspended in between like a ladder extending between heaven and earth revealing the connectedness between the two realms. This picture expresses the power of His oneness and unity with man (humanity), granting us access into the unsearchable, boundless riches of Christ (Eph. 3:8-9). The hidden mysteries — wisdom that has been hidden, which God destined for our glory before the ages (1 Cor. 2:7).

The fifth letter of the Aleph-Bet, having the numeric value of five is “hey”. The meaning of the name “Hey” is “look,” or “behold!” According to the Jewish mystics, Hey represents the divine breath, revelation, and light. Also representing God’s creative power. (Gen. 1:3-4). “God is light; in him there is no darkness at all” (1 Jn. 1:5).

By the word of the Lord the heavens were made, their starry host by the breath of his mouth.

God breathed life into Adam and he became a living soul. Time spent with YHVH in His presence and meditating on His Word is key to engaging the breath of God. “By the word of the Lord the heavens were made, and by the breath of his mouth all their host.”

And the Lord God formed man of the dust of the ground, and breathed into his nostrils the breath of life; and man became a living soul.

As I write, I sense the presence of God breathing life into this word …

One thing I ask from the Lord,  this only do I seek that I may dwell in the house of the Lord all the days of my life to gaze on the beauty of the Lord and to seek him in his temple.

Paul wrote that “all scripture is breathed out by God” (2 Timothy 3:16). This remarkable phrase about the breath of God provides us a look into the intimate relationship between God and His Word. 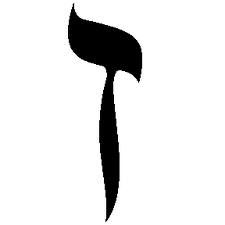 Zayin is the seventh letter of the Aleph-Bet, having the numeric value of seven. The pictograph for Zayin looks like a sword. Zayin means “weapon” or “sword.” It also embodies rest. The weapon speaks from an accomplished position.  It is authority executing decrees and government from our seat of rest.  Don’t just think of a weapon as a sword, but also as a plough. I’m reminded of a prophetic word given to me in 2017, “And He says as you work for Him rest is a weapon . . . He will show you how to rest . . . He says, “don’t get over zealous with His direction” Rest is a weapon . . . He is going to tell you how to rest and when to rest . . . He’s going to teach you how to rest in the middle of everything . . . He’s going to teach you how to come into His presence in the middle of everywhere. . . WOW . . . Amen.” Learning to rest in the Lord in the midst of so much chaos is challenging, but “God is our refuge and strength, a very present help in our time of trouble” (Ps. 46:1).

Since Zayin represents a weapon of the Spirit, remembering the Torah of Moses is here depicted as a great weapon to be used in spiritual warfare in our lives.

I truly pray this will be a life-altering spiritual transformation within you as you gain a greater perspective on the loving ways of an all-powerful, all-knowing Father!

The Lord says, “ If I shut up the heavens so that there is no rain, or if I command the locust to devour the land, or if I send a plague among My people, and My people who are called by My name humble themselves, and pray and seek My face, and turn from their wicked ways, then I will hear from heaven, and I will forgive their sin and will heal their land ” (2 Chron 7:13-4).

Notes: All Scriptures are taken from the New American Standard Bible (NASB) unless otherwise noted.